What’s the Future of DOORS? The Inside Story from a Former IBM Software Architect

Ed Gentry joined the Intland Software team in August 2021 as Chief Product Architect. Previously, he has worked for companies offering software and hardware engineering solutions. He joined the DOORS team back in the Telelogic days, before the company was acquired by IBM Rational. We talked to Ed to get his insider take on the evolution of DOORS, and how he sees the future of this widely used tool suite! 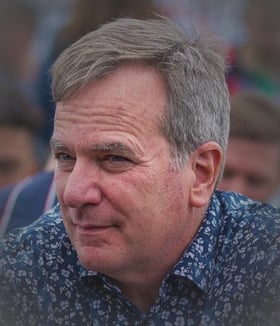 What should we know about your professional background?

Ed Gentry: I have spent more than 25 years designing and developing tools to help clients realize software and hardware systems. I started in the 90s with CASE tools, then moved to model-driven software modernization, and for about the last 15 years I’ve been in the ALM world. My passion is enabling these companies to be more efficient in building their complex and highly compliant products: airplanes, cars, medical devices, etc.

We also hear you have a particular fondness for wine…

Ed Gentry: Yes, this started when I first lived in Germany at the beginning of my career. I was advised early on that if you want to really appreciate wine – and I was to later learn many other things e.g. beer, bread, cheese – you have to visit the regions where it is produced, experience the culture, appreciate the micro-climate, and the good earth from which the wine is produced. The particularities, contingencies, and eccentricities of context matter. They give what we produce its distinctiveness and personality. The software world is not dissimilar.

How did your relationship with DOORS develop over time?

Ed Gentry: In 2004 I joined Telelogic as a software architect. At the time Telelogic was a leader in the development tools market with a complete solution: requirements, models, source control, work items, etc. The pride of the Telelogic solution stack was DOORS which at the time was the undisputed leader in the requirements market. DOORS’ dominance was due both to a rich feature set as well as a very flexible API making it easily customizable to individual customer needs. DOORS was especially prominent among system customers, those with a significant hardware component in addition to software.

In 2008, Telelogic was purchased by Rational, the IBM brand focusing on development tools. Initially, this change was positive: Rational had a very similar focus, though at the time almost exclusively on software. We were tasked with designing the next-generation DOORS product on the foundation of Rational’s existing requirements solution. Having an existing foundation to work with was a blessing and a curse. The Rational platform was rich with functionality and designed by bright engineers – but this platform in general and their requirements tool in particular were tuned for the needs of the software market, and there was often an impedance mismatch with the often highly regulated demands of the system market. The tool we eventually delivered, Next Generation, carried DOORS’ name but lacked many of its distinctive features which made it so indispensable to the engineering world.

What was your personal experience after the release of DOORS NG?

Ed Gentry: Over time, IBM’s strategy changed: they absorbed the Rational brand, and it became clear to me that engineering tools were less and less strategic for them. All of this was personally disappointing. I have always been a customer-facing architect. The IBM solution has value, but I grew weary of telling customers how long they would have to wait before we could deliver important features – many features that DOORS already had 15 years ago. Several years ago, IBM transferred the development of their ALM tool stack (Enterprise Lifecycle Management, or ELM) to a different company. While IBM still owns the intellectual property, this was a clear sign to me that they did not consider ELM a strategic product, but rather just another investment in their huge portfolio. My concern was, and still is, that ELM will quickly become a cash cow for IBM – a product that they just milk for maintenance revenue and invest just enough money to keep the clients from leaving quickly.

Though I had been with this team for many years and built good relationships with many customers – especially in the automotive industry – it was clear that I needed to change.

How do you feel at Intland so far?

Ed Gentry: A month ago, I joined Intland as their Chief Product Architect. At Intland I found a high-energy team with a similar passion and focus to my own. Their product codebeamer is a full-featured ALM tool with many of the features that made DOORS great. This has enabled codebeamer to supplant DOORS in many large OEMs and suppliers here in Germany and around the world. My job here at Intland is to work with customers and our development team to drive innovation in order to make these customers even more effective in delivering high-quality products.