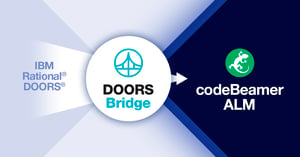 Legacy software tools are limiting software teams in various ways. Yet some teams hesitate to leave IBM Rational® DOORS® and other legacy suites behind. Let's dive into the details of this challenge!

Large software development teams, even if they are innovating disrupting technology, have a tendency to stick to their tried and tested ways. Especially in safety-critical product delivery, where adherence to regulations is crucial, there’s a longstanding tradition of using legacy tools and processes to build new products.

Heading the list of entrenched legacy software solutions is IBM Rational® DOORS®, the de facto standard Requirements Management platform in several industries. As perhaps the most widespread toolset, DOORS has been inherited by generations after generations of developers. Which is no surprise, considering that IBM published the suite in the early 1990s…

The first is, obviously, a great advantage: if you’re developing software using the same techniques as your dad may have done, you’ll be content with DOORS (even though you could easily find better tools). Then again, if that’s how you are working in today’s digital era, you’re lucky to still be in business. Hence the unparalleled disadvantage that 2) brings about.

The winds of change blowing right through your DOORS…

Digital transformation, the raging success of Agile and DevOps strategies, and the emergence of IoT & system-of-systems products have all significantly shaped the way software is being developed today. In safety-critical industries, an increasingly strict regulatory environment further forces developers to adapt.

Sensing these changes, IBM came out in 2012 with Rational DOORS Next Generation (or, simply, DOORS Next), their supposedly modern, collaborative, and Agile offering. Opinions about the value of this piece of software are very mixed, but one thing is sure: the transition from the “old” DOORS to Next is a nightmare, greatly hindering its adoption.

In addition to difficult migration, there are many other limitations of using antiquated tools (including IBM’s DOORS, both new and old) for developing modern software, and especially so in the case of mission-critical or safety-critical products.

Legacy pieces of development software limit your ability to create a traceable trail of work items across the lifecycle, making regulatory compliance a pain. Clunky user interfaces make it difficult to reach even the functionality that exists. Collaboration within the tool is generally substandard – however, at least external collaboration can be possible via exporting data, as long as other stakeholders are also using DOORS… That’s small consolation for the fact that other tools are difficult to integrate into a legacy toolchain.

codeBeamer ALM and IBM DOORS Working Together via DOORS Bridge

What all this boils down to is that you’re effectively stuck with your old toolset that fails to support the needs of software development teams in today’s digital era. It’s no wonder that, in order to avoid falling behind, fast-moving teams are looking to make the transition to more modern development toolsets that support their needs.

Teams operating in safety-critical sectors are slow to make the transition, but even they are realizing that without smart software tooling, it’s virtually impossible to reach compliance. And with new and continuously updating regulations, it’s not getting easier.

To alleviate the limitations of legacy toolsets, innovative development teams look for modern, mature, and fully integrated solutions. codeBeamer ALM is becoming a go-to platform for developers of safety-critical technology due to the many ways it enhances delivery processes.

The advantages that state-of-the-art tooling like codeBeamer ALM can provide are many:

Making the transition from IBM Rational DOORS or other legacy toolsets to a modern platform is a great decision that can positively impact your company’s bottom line for years to come. And while DOORS doesn’t offer any infrastructure to simplify migration, we have good news for you: codeBeamer ALM does.

Using our proprietary DOORS Bridge technology, you can make the transition smooth and painless. Better still, you can avoid disrupting your relations with external suppliers by making codeBeamer ALM your center of lifecycle management, while maintaining DOORS as a parallel subsystem to ease the transition.

To learn more about the DOORS Bridge and for more information on how we can help you move away from a legacy toolchain to a modern solution, get in touch with Intland.