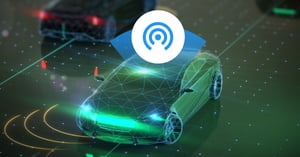 Software updates in cars are traditionally performed by way of cables in a workshop. Wireless over-the-air (OTA) updates make this process faster and more convenient – and this seemingly simple switch could radically change the automotive industry.

The automotive industry is a fast-moving sector with continuous development aiming to enhance the safety and comfort of vehicles. Similarly to updates delivered via cables, OTA updates can affect various subsystems of a car. As cars come with more and more lines of code, software is omnipresent in an increasing number of components. OTA updates can affect various subsystems including navigation, the entertainment system, or even essential systems like the engine or brakes.

While this could (and in some cases, does actually) bring certain risks, the promise of OTA updates is that they can enhance the functionality, security, and safety of our cars conveniently.

Why are OTA updates such a big deal?

To understand why this means a tectonic shift in the auto industry, let’s take the example of Tesla. Due to Tesla-happy media coverage and the company’s professional PR department, it’s a well-known fact that Tesla is among the highest-valued carmakers globally, despite the fact that their production volumes are a fraction of those of traditional carmakers.

It’s a lesser known fact, however, that their cars are also highly valued by the second-hand market. In fact, at certain periods in the recent past, used Teslas were worth more than new ones. First, because you didn’t have to wait for a used Tesla, it was available right away. And second, because their functional value actually increased after purchase – and OTA updates are key here.

Through OTA updates, Tesla was able to reverse the prevalent trend of vehicles starting to lose value right after they are purchased. Via quick software development and validation (more on this later), Tesla was able to outpace traditional players. The value of their cars is not necessarily based on the functionality they have today, but on the promise of what they could have later.

For a prominent example of significant updates delivered over the air, let’s reach back to Tesla’s 2018 run-in with Consumer Reports. After CR reported an overly long stopping distance for the Model 3, Tesla got to work right away. Within days, they pushed out an OTA update that shaved about 20 ft off the Model 3’s braking distance, prompting instant recognition from Consumer Reports.

That speed and convenience of delivering solutions to mobility problems is unprecedented. But as some experts warn, novelty and velocity rarely translate to safety… After Tesla’s magic trick with the brakes, automotive engineers wondered how the company was able to develop, test, verify, and document such an impactful update on one of the car’s key safety system in just a few days.

Traditional automotive OEMs currently operate with long update cycles, pushing out a couple of updates every few years. Tesla has put out 388 OTA updates to their vehicles’ software in just 6 years.

While OTA updates definitely unlock this kind of potential for automotive developers, they also bring risks. Traditionally, updates to key car subsystems would have to go through rigorous testing and regulatory validation. Tesla’s brake enhancements did not go through that procedure, and this raised concerns about the safety implications of carmakers’ ability to push out updates as frequently as they wish.

The high velocity of OTA updates is somewhat at odds with the level of scrutiny required for optimal safety. Yet it seems likely that traditional mobility OEMs will take the other route, opting for maximum rigour in their safety procedures even at the expense of delivery speed. Currently, Tesla seems to be outmanoeuvring its more cautious competitors, but safety may play a key role in how OTA updates transform the auto industry in the future.

To learn more about the challenges of automotive innovation today, watch this recording of our webinar with AImotive in June 2020: