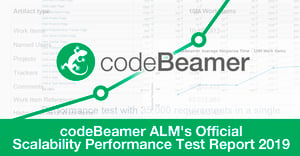 Most enterprise Application Lifecycle Management platforms claim to be scalable both in terms of the number of users, and the volume of work items they can manage at optimal speed. Performance benchmarks, however, are not always provided.

With this Official Scalability Performance Test Report (updated in March 2019), codeBeamer ALM proves that it works swiftly and smoothly with 10 million work items and 1,000 concurrent users. Demonstrating its ability to handle as many as 35,000 requirements in a single file, codeBeamer lives up to its reputation of being the fastest ALM platform on the market.

Read on to find out more about the results of our performance tests conducted in March 2019.

As digital transformation unleashes never before seen levels of product complexity, the popularity of ALM tools is growing fast across industries. While the needs of small and mid-sized development teams are met by multiple ALM tools, enterprise users are often facing problems of scalability. Large global enterprises require their tools to be truly scalable to handle hundreds or even thousands of users, and large volumes of work items.

In environments such as automotive systems development, the engineering of medical devices or aviation technology, or pharmaceutical development projects, there might be hundreds of users logged in at the same time. These users are often working from different locations globally, contributing to multiple projects. Each of these projects may contain thousands of work items, and in the case of complex products, tens of thousands of requirements might be handled in a single file.

To realize the benefits of collaborative, integrated ALM, these enterprise users need a platform that is optimized for use in such a scaled environment. Intland Software's development team is working hard to ensure that users of codeBeamer ALM don't have to worry about scalability bottlenecks. As the tool of choice for many enterprise users (including BMW, Mercedes-Benz, Dassault Aviation, Flex, Samsung, Lufthansa Industry Solutions, and many more), codeBeamer ALM is optimized for maximum performance in large-scale development environments.

The below results of our scalability performance testing session prove this commitment.

To measure how codeBeamer handles a large number of users, we performed a login stress test with 1,000 users on a database of 10 million work items. Simulating 1,000 concurrent logins over a period of 300 seconds, the average login response time was 240 ms.

codeBeamer ALM's response times of user requests were also outstanding. Our tests showed that codeBeamer worked smoothly with up to 1,000 users and 10 million artifacts:

When working with such a large volume of artifacts, exchanging data across tools can be problematic. As the below testing data confirms, codeBeamer ALM excels at handling thousands of requirements in a single file.

35,000 Requirements in a Single Document

In large and complex projects, it's not uncommon for development teams to exchange thousands of requirements between tools. Exporting and importing large numbers of requirements, however, is a resource-intensive process. During our performance tests, we imported a ReqIF file containing 35,463 requirements (55 MB) to codeBeamer ALM in just 25 minutes.

Once imported, opening and editing this massive amount of requirements only took a matter of seconds:

In case you need to manage an even higher number of work items in your scaled development efforts, feel free to contact us for further testing data! Ready to get started with codeBeamer ALM? Start your free trial!