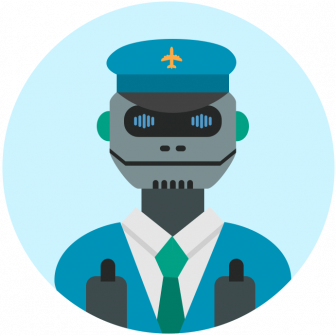 Among other examples of advanced technology transforming various industries as well as our everyday lives, autonomous cars have been a hot topic in recent years. While seeing a driverless car on the road might surprise you (and this surprising moment could happen sooner than you’d think), road vehicles aren’t the only means of transport that technology is about to revolutionize.

In fact, commercial aviation is already heavily automated: autopilot and other automated control systems have been in use for decades, supporting the operation and control of passenger or fighter airplanes. It now seems that smart, connected, cutting-edge technology can do way more than that. Let’s see how autonomous aircraft systems could affect the way we fly in coming years.

As opposed to traditional road vehicles, where autonomous technology is just taking its first baby steps, pilots have long gotten used to taking advantage of autopilot and flight control/flight management systems. A survey quoted by a NY Times article shows that airline pilots flying Boeing 777s spend seven minutes manually controlling a plane during a typical flight – and even this is double that of a pilot flying an Airbus plane!

With flight management systems typically activated right after takeoff, and doing 95% of the work of pilots during the flight, it’s obvious why such technologies are beneficial for those in the cockpit. But convenience is not the only promised advantage of automation: some experts claim that as autopilot systems have made flying considerably safer in past decades, autonomous aircrafts could completely eliminate human error, thus reducing the chance of accidents. Others, of course, raise concerns over the dangers of pilotless planes, emphasizing the unique skills of humans such as smelling, hearing, feeling or seeing anything that may help them identify problems before any sensors could.

The potential to reduce costs adds to the appeal of unmanned aircrafts. Since the 1980s, airlines have been able to make significant cost savings by using planes that could be flown with just two pilots, as opposed to the previous standard of three crew members. In a related piece of research, NASA is already experimenting with air traffic control software systems that are capable of coordinating hundreds of aircraft at the same time, manned by fewer human controllers to cut costs.

Therefore, current aircraft technology development trends show that manufacturers are looking to develop solutions that reduce the dependence on human pilots. In fact, according to Boeing’s CTO John Tracy, some freighter customers are already showing demand for autonomous airplanes – the idea of which, technologically speaking, aren’t as far fetched as you’d imagine. In fact, he says that such technologies are readily available, and implementing them is just a question of regulatory requirements, certification, and whether customers would actually board a plane with no pilots.

Not having to worry about hesitant passengers, the Pentagon’s research arm DARPA has begun testing theirAircrew Labor In-Cockpit Automation System (ALIAS) for fighter jets. This portable onboard system (imagine it like a robot that sits in the back seat of a military aircraft) is capable of acting as a co-pilot and taking control from the pilot in case of an emergency, also being able to take off or land the fighter jet in safety.

With the certification of airborne equipment becoming a challenge for aviation developers, the potential effect of rigorous requirements is not to be taken lightly. Developers are already addressing the question of regulation and compliance. Recently, Airbus’s A3 division has revealed their urban air-transport project titled Project Vahana, and Airbus Helicopters is involved in the Skyways project with the Civil Aviation Authority of Singapore. This latter project focuses on an autonomous drone delivery service, with the aim to help shape the regulations for unmanned aircraft in Singapore. Airbus hopes that successful testing will help manage the public’s reservations about the testing of pilotless passenger aircraft.

An exciting and promising piece of research in the realm of commercial unmanned aircraft is Airbus’s CityAirbus concept, involving multi-passenger vertical-takeoff-and-landing (VTOL) vehicles and an Uber-like ride-hailing service. Another idea is zenAirCity, an all-round transportation concept for megacities that involves the use of unmanned electrical aircraft.

Overall, autonomous aircraft technology not only looks like a promising area of development, but could in fact become reality surprisingly soon. Aviation developers are currently working to overcome challenges of safety, regulation & certification, and public perception, as well as the few remaining technological questions. The first few prototypes of unmanned urban passenger vehicles are scheduled to fly at the end of 2017.