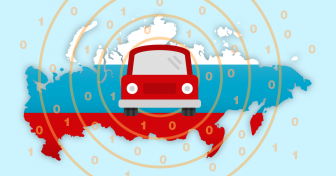 In a recent article, we analyzed how autonomous technology is shaping the automotive market in the EU and the US. New and sometimes unlikely alliances are formed in the race to develop the first fully autonomous car (with Level 5-capable hardware already available!), one that can take passengers from point A to B with no human intervention whatsoever.

While US/EU automotive manufacturers and tech companies like Google, Lyft, Waymo and Uber are spearheading development, the rest of the world isn't far behind.

In China, Baidu has partnered with Continental to develop self-driving technology. In Korea, Samsung is about to start testing its own autonomous solution. Indian developers Tata Elxsi are building aftermarket tech that can be installed on traditional cars to give them autonomous features.

Russia enters the race for an autonomous future

In early June, Russian technology company Yandex (often referred to as the "Russian Google") revealed its research & development project to develop a self-driving car. The idea of Russia entering the competition in this high-tech sector so late might have caused some skepticism among experts.

But Yandex also unveiled a video showing a functional prototype of their modified Toyota Prius V driving in fully autonomous mode around a protected test area:

Public testing of Yandex's autonomous will begin next year. The company says their solution is based on a variety of sensors, Artificial Intelligence, and "proprietary computing algorithms" to help the car navigate in traffic.

Yandex's Head of PR Vladimir Isaev told TechCrunch that the company will leverage its existing technology and expertise from other solutions, including computer vision technologies, Yandex.Navigator, and Yandex.Maps, which puts them in a good position in the competition to be the first one to present a fully autonomous car. They are able to develop their self-driving software completely in house, and plan to build fit-for-purpose autonomous driving hardware (GPU, LiDA, etc) with their partners in the future.

While Yandex's announcement made it into the news worldwide, it's not the only Russian company working on proprietary self-driving technology. Cognitive Technologies is a successful Russian tech company that is also working on its own autonomous system and algorithms called C-Pilot.