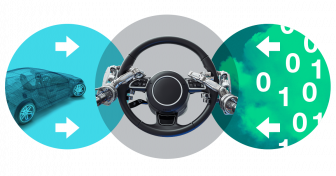 Automotive industry players and market analysts agree that once fully developed, autonomous technology will completely reshape public and private transport. It's no wonder that everyone wants a piece of this fundamental and disruptive change that will open up new opportunities for those equipped to handle the challenges that are, for now, towering ahead.

In order to ensure that they are the first to innovate new technology and ready to tackle any issues on the way to success, various companies are now forming new associations, thus possibly reshaping the auto industry as we know it.

As the competences required to develop autonomous vehicles are mainly related to software, the processing of digital information, and artificial intelligence (to some degree), traditional carmakers immediately found themselves left behind a bit. "Outsider" technology companies from the Silicon Valley such as Google, Lyft and Uber have joined the competition since they had all the comparative advantages in innovating the technology necessary to realize the dream of the self-driving car – but not much experience in manufacturing cars.

It is only natural, then, that players involved in the development of autonomous technology are now naturally drawing closer, forming alliances to take advantage of each other's strengths and capabilities. In what is referred to as "a frenzy of deal-making", traditional carmakers have and still are partnering with technology companies (newcomers to the field) to deliver safe and reliable, fully autonomous vehicles as soon as possible.

Ride app company Lyft has been particularly active (and successful) in forming ties with established carmakers. In 2016, they teamed up with General Motors with the latter spending $500m to bolster their joint efforts to create autonomous cars. In May 2017, it was announced that Lyft found another partner in Google parent Alphabet's division Waymo, currently in legal battles with Uber, a competitor of Lyft.

Lyft isn't the only one that Waymo chose to partner with: in cooperation with Fiat Chrysler Automobiles, there are now 600 robot Chrysler Pacifica minivans running tests on public roads in Phoenix. Waymo has also been reported to start talks with Honda about possibly lending self-driving technology to Honda's own autonomous development efforts.

Uber, of course, has no intention to be left behind in the race with Lyft and other developers. Looking to start a (possibly very profitable) self-driving taxi service, the company has purchased self-driving truck startup Otto (founded by ex-Google employee Anthony Levandowski), leading to lawsuits between Waymo (Google) and the ride-hailing company. Uber is also forming ties with Daimler by agreeing to use the German carmakers's vehicles in its self-driving fleet.

Ford is also aiming to keep pace with the competition, having decided to invest $1 billion in Argo AI, a robotics company based in Pittsburgh, and partnering with Baidu to invest in lidar (laser radar) development.

How these new and somewhat unlikely partnerships will shape the future of this new market segment is yet to be seen. Automotive experts, market analysts and carmakers all seem to agree, however, that we are on the verge of a fundamental change that not only will redefine the way public and private transport works, but what may also open up huge business opportunities for those that are able to act early.

As a major part of "acting early", automotive developers are now turning to next generation ALM to future-proof their autonomous innovation processes. To learn more about how Application Lifecycle Management helps the development of safe and reliable automotive systems, download our free eBook below: