Automotive Recalls in the First Half of 2017 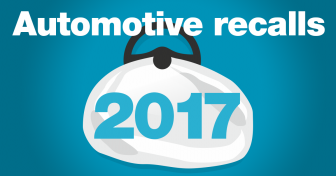 Recalls due to faulty products are any automotive company's worst nightmare. Issuing a recall is expensive, negatively impacts the company's reputation for quality, and is oftentimes a result of a product mistake that was discovered in an accident where users were injured.

Yet despite all the efforts of suppliers and carmakers to avoid such scandals by ensuring the safety and quality of their products, automotive recalls still occur. In fact, 2017 has seen several automotive companies being shaken by large-scale product recalls.

Among them, Japanese automotive supplier Takata's airbags have caused the industry's biggest recall ever, with millions of vehicles affected over the past couple of years. To date, exploding Takata airbag inflators have been linked to at least 17 deaths and over 180 injuries worldwide, causing the manufacturer to recall as many as 70 million airbags over the past 4 years.

Honda, Ford, Mazda, Chrysler, Nissan, and Toyota are among the carmakers worst hit by the recall that affected over 19 vehicle brands. The defect, thought to be caused by excessive moisture in the inflators in Takata airbags, has been discovered in 2013 and has prompted several rounds of recalls since.

Some carmakers have already partnered with Takata's rivals to supply them with replacement parts. Takata filed for bankruptcy protection in June 2017 in the U.S. and Japan, a move that signals a shifting landscape in this segment of automotive suppliers.

In summer 2017, Honda announced the recall of 1.2 million Accord models produced between 2013-2016 due to a faulty battery sensor causing fires in the engine. 2017 doesn't exactly seem like Honda's best year: even before this battery sensor recall, it had already been the worst-hit automaker by the Takata airbag scandal.

"Approximately 11.4 million Honda and Acura vehicles in the U.S. are subject to a recall or Safety Improvement Campaign related to Takata airbag inflator ruptures."

Earlier this year, South Korean regulators ordered Hyundai and its affiliate Kia to recall around 240,000 of its vehicles because of defects related to parking brake lights and fuel hoses. Unlike an earlier problem with Kia and Hyundai engines resulting in the recall of 1.5M cars in April 2017, these brake light and fuel hose issues did not cause direct safety risks.

Due to concerns over the safety of their airbags and alternators, Fiat Chrysler has issued a recall of a total of 805,000 vehicles in July 2017. Just a month earlier, Ford discovered a a problem with some of their models' driveshafts, causing the carmaker to recall about 400,000 Ford Transits built between 2015-2017.

Evidently, the first half of 2017 has been a tumultuous period for carmakers around the world. The Takata scandal, the largest recall in automotive history, has been followed by several other large-scale product recalls, costing carmakers millions of dollars and changing consumers' perceptions of the safety and reliability of the affected vehicle brands. It's no wonder that more and more automotive suppliers and manufacturers are searching for ways to ensure the quality and safety of their products.

As the go-to Application Lifecycle Management solution for automotive developers, codeBeamer ALM and Intland’s Automotive ISO 26262 Template helps ensure product quality and compliance while driving down costs and development time. For more info, watch the webinar recording below or send us your questions!