An Outlook on Automotive Tech Trends in 2018 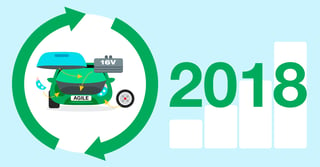 Automotive experts have been talking about disruptive change in the industry for ages. New technologies are expected to turn the auto industry upside down any minute now – and this has been so for several years.

Is the automotive revolution going to fundamentally change our lives in 2018? What’s the next step on the road to the new era of the automotive industry? And what’s the outlook for carmakers this year?

Gradual Change in the Auto Industry

We have published our fist automotive technology trends forecast in early 2016 which identified the most important factors shaping the automotive industry in the year ahead: IoT connectivity and the increasing role of software, electrification, and modularization in the car industry.

2017 has seen us widening our scope. In our post titled Automotive Industry Development Trends 2017, we focused not only on automotive technology (with autonomous driving, connectivity, and electric cars still on the rise), but discussed how these technologies affect consumer behavior, as well as the automotive value stream and revenue sources for automotive developers.

2018 rolled around, and while we do witness the odd Tesla silently gliding past, the much-touted automotive revolution isn’t readily apparent on the roads. So how are these technologies, seemingly always on the news, faring this year and what should we expect to see in the automotive industry in 2018?

Technology Trends in the Automotive Industry 2018

As the most important automotive innovation in the last decade, autonomous technology is still the number one factor expected to shape the industry’s future. And while you won’t be seeing completely driverless vehicles on the roads for yet a few more years, that doesn’t mean change is not underway.

In fact, most innovative research & development in the auto industry today is already focused on enabling self-driving transport. In 2017, Nvidia has introduced a chipset to support Level 5 autonomy, and new driver-assisted technologies (ADAS – Advanced Driver Assistance Systems) are already gradually seeping down into today’s vehicles. Unlikely alliances to support self-driving development are already reshaping the auto industry landscape as we know it.

And full autonomy isn’t very far off either: the race for the first Level 5 autonomous car is expected to result in fully functional driverless vehicles hitting the road as early as 2020. In the meantime, new wireless communication technologies (5G) are being developed, and AI (Artificial Intelligence) is evolving fast to enable full autonomy.

In addition to tech challenges, however, building confidence in this technology also takes considerable time. Regulatory bodies and consumers alike are slowly adapting to the idea of driverless cars, regardless of assurances that self-driving vehicles communicating via the IoT will actually be much safer than human-driven ones. Regulation around autonomous vehicles remains unclear, and testing is confined to specific areas and test tracks.

In 2018, automotive developers will continue the race towards complete autonomy at full steam, forcing regulators to deliver suitable safety standards very soon. Innovation in this area is expected to bring us closer to full autonomy in the year ahead, shaping our perception of self-driving technology, and gradually changing the way we think about transport.

Another evergreen topic, electrification in the automotive industry is expected to continue and even grow. The sale of fully electric cars was up 47% in 2017, and in Nov 2017, Bloomberg reported a 63% jump in global sales (mainly due to China’s efforts to reduce pollution, with Europe being the second-biggest market).

In addition to a global effort to encourage the shift to renewable energies, there’s another reason to the success of electric cars. “The electric car will merge with automated driving and the connected car.” said Mary Gustanski, Delphi’s vice president of engineering in a report by CarTalk. Put simply, electric vehicles are easier for computers to drive, which helps propel the development of both technologies.

Pair that with the fact that ride-sharing is still a growing trend in the transport industry, and you’ll see what the future is shaping out to be: fleets of fully automated, electric, shared vehicles characterize this new era in the automotive industry.

With battery prices plummeting and continued government subsidies offered for e-vehicles around the world, electrification is set to be a growing trend. Most major carmakers have announced increased focus on electric powertrains, and while it won’t fully replace traditional combustion engines in coming years, EV (electric vehicle) technology is generally expected to grow further in 2018.

Blockchain technology is a super hot trend right now across industries – suffice it to say that it’s a cousin of bitcoin, the cryptocurrency that essentially blew up in 2017 (Forbes’ reaction: “2017 Will Be Remembered As The Year Of Bitcoin”).

Blockchain, with its promise to redefine digital trust, is widely regarded as a potentially transformative technology in several verticals. Its main implication for the auto industry is that it could create a trusted, accurate protocol for the automotive parts supply chain, helping remove counterfeit parts from the market. This will shape the pricing strategy of carmakers, and could also have a significant impact on the car repair industry.

But it also supports the development of connected car technology, and with digital trust being a key issue, it is closely connected to the fourth trend expected to shape the auto industry in 2018.

Multiple sensors (radars, LIDARs, cameras, etc) and wireless V2V (vehicle-to-vehicle) communication over the IoT are basic pillars of self-driving automotive technology. All the data they generate and transmit means a brand new source of revenue for automotive companies: Big Data is expected to be the next big thing in the industry.

Car data monetization is just one of the ways automotive companies are looking to capitalize off the information generated by the variety of sensors in tomorrow’s smart cars. Big Data enables predictive analysis, another game-changing opportunity that could fundamentally reshape the car maintenance and repair industry. Simply put, your future car will continuously monitor the health of all its components, and will let you (and your car mechanic) know ahead of time if something needs to be repaired or replaced.

Coupling Big Data with Artificial Intelligence (AI) could have major implications for the auto and transport industries. The combination of V2V communication, Big Data, and AI could contribute to a variety of feature and service innovations including more efficient traffic systems, customized insurance policies, etc.

Benefits for drivers include a lower number (and cost) of breakdowns, and cheaper insurance for safe drivers. For automotive developers, fleet learning, data-enabled features, and ultimately, car data monetization are among the most promising opportunities that big data will continue to open up in 2018. Challenges include, of course, the secure management of such data, and clarifying who owns (and who is to benefit financially) from all this data.

Overall, 2018 is set to be another exciting year for the automotive industry: trends that have set roots in 2017 and before will continue to shape the future of transport, while innovation will help open up new opportunities in automotive development.

To learn more, watch this webinar recording from 14 Feb 2018 below. Have any questions? Feel free to reach out to us!